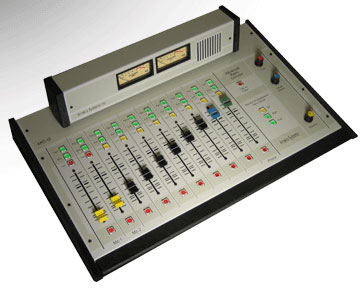 
The ARC-10 series or radio consoles are general purpose consoles that meet the needs for most On Air Radio & Radio Production studio applications. Channels One & Two are high performance mic channels for on air talent with a guest. Channel ten is an advanced telephone interface to an external hybrid for Live callers or an Off-line contest call. Seven stereo line input channels easily handle the other audio sources, such as CD players, found in most studios. Channel nine can even be optionally configured with a Windows PC USB interface for use with Live On Air, Automation, & Production software ('Free' Digilink-Xtreme (ARC mode) software is included). With 5 million operation, LED lighted, switches; long life faders; and electronic switching of all audio signal paths; the ARC-10 is a rugged, reliable, and versatile console for professional Radio studio applications.

The ARC-10 family of consoles comes in 3 models. They all have the same front panel operation and differ only in the types of input sources that they accommodate. The choice of model tailors the console to your specific studio application.

Two of the models (ARC-10U & ARC-10UP) support standard consumer style source equipment with off the shelf cables for installation similar to a home stereo system. The third model (ARC-10BP) supports balanced pro sources which may require custom cables by an experienced radio technician.

Important Features Common to all 3 models: