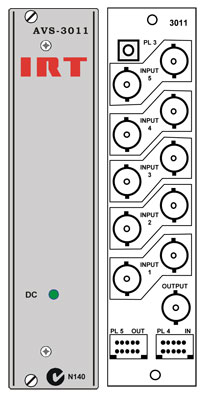 - 5 x 1 analogue video with looping inputs
- May be cascaded to 20 x 1
- Local or remote control options
- Universal wire per crosspoint or binary coded remote control
- Compatible with other 3000 series analogue & digital switchers
- May be mounted in same frame as other IRT Eurocards. including VDA’s, ADA’s, detectors and processors

The AVS-3011 analogue video switcher is part of a family of "smart" switchers in Eurocard format that may be linked and configured by the user to cover a wide range of switching and monitoring functions.

The AVS-3011 supersedes the AVS-3010 and provides all of its predecessors functions together with added static protection and user configurable grounding wire per crosspoint remote control.

On board links allow several switchers to be joined for 10x1, 15x1 or 20x1 operation.

The switcher may be slaved to operate in conjunction with other 3000 series switchers for analogue audio, digital video and RS422 or similar control signals.

This makes the switchers ideally suited to situations where a mixture of analogue and digital signals is present.

All panels have tally LED's and switch label inserts. Multiple panels may be used with tally to each panel.

A complete video plus stereo audio switcher can be assembled from just two modules and can be accommodated in a single rack unit frame.