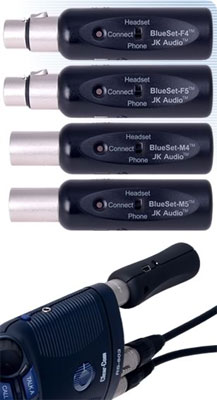 A 3.5 mm stereo headset jack contains a mic level output signal suitable for recording, with the beltpack headphone signal on the left channel, and the Bluetooth return signal on the right.

A switch selects between connection to a 3rd party Bluetooth headset or a cell phone.

Phone Connect:
Pair BlueSet to your cell phone to extend your system around the world. The belt pack Mic/Talk button controls audio from the cell phone into the intercom system.