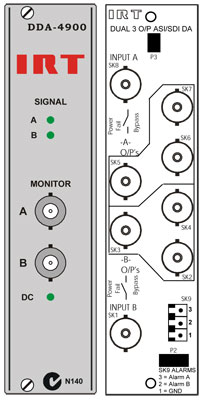 The DDA-4900 270 Mb/s serial digital video distribution amplifier provides the user with a single standard module to cover a wide range of distribution and monitoring functions for ASI or SDI signals. Two triple output distribution amplifiers are provided on the one card. Signal bypass relays automatically switch the inputs to one of their outputs in the event of loss of power.

Due to the fact that standard loop through techniques used in the analogue domain are unsuitable to the digital domain most digital equipment comes with no facility to route the input signal to other locations. As a result a DA is required at almost every point in the digital chain.

Serial digital signals also suffer severe deterioration over relatively short cable distances. The DDA-4900 provides a means of extending the working distances that can be achieved by equalising and retransmitting the data mid route.

The DDA-4900 may also be used to provide input equalisation for devices not having this feature, as most unequalised inputs will only support cable lengths of less than 20 metres.

Frequent re-clocking of serial digital signals can lead to serious increases in jitter with resultant data errors. The DDA-4900 does not include re-clocking, which minimises these errors, leaving re-clocking to be done by the receiving device. For applications requiring reclocking the DDA-4007 should be used.

To provide for the polarity sensitive nature of ASI signals, all outputs of the DDA-4900 are in phase with the input.

The DDA-4900 is a Eurocard module designed to fit IRT's standard Eurocard frames as well as IRT's 4000 series frames for use with IRT's SNMP system and may be used alongside any other of IRT's analogue or digital Eurocards.