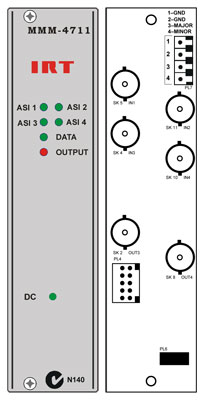 The MMM-4711 and MMX-4711 are part of a family of data transcoders for converting between the commonly used MPEG2 Transport Stream formats for video distribution in the broadcast industry.

With the MMM-4711 up to four ASI signals can be combined together and converted into a single ASI signal with a settable output payload rate.

The output ASI stream is a valid stream, which complies with all facets of ETR290.

Provided the total sum of the ASI inputs does not exceed 0.9* x the set output rate, units can be cascaded to increase the number of ASI inputs into a single ASI output.

The MMX-4711 separates the combined ASI signal back into the original four ASI signals (at their original rates and without any modification of the stream, or stream timing). If more than one MMM-4711 has been cascaded then the MMX-4711's cascade in the reverse order.

Inputs are automatically equalised for lengths of up to 250m of Belden 8281 or equivalent cable.

Front panel indication and relay alarm on the MMM-4711 transmitter shows if there is an input data rate violation. Corresponding alarm on the MMX-4711 receiver shows a loss of ASI input.

The MMM-4711 and MMX-4711 are designed to fit IRT's standard Eurocard frames and may be used alongside any other of IRT's analogue or digital Eurocards.