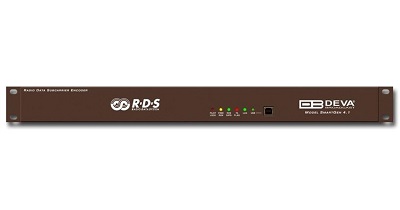 
The SmartGen 4.1 is a fully-functional RDS/RBDS encoder that supports all service IDs and offers simultaneous scrolling-PS, RadioText messaging and the interactive function RT+ for song tagging. SmartGen 4.1 is the most efficient solution for sending TMC and EWS Services. It supports both the European CENELEC and United States NRSC standards.

With its built-in  USB,  TCP/IP,  UDP/IP  interfaces,  SmartGen  4.1 grants fast programming  access and full integration of RDS/RBDS transmissions with the station’s other networked functions, including message streams for digital radio and Webcasting.

In addition, all DEVA RDS/RBDS Encoders are accessible via the free of charge dedicated SmartGen RDS/RBDS Encoders  Manager.  The simplified user-friendly interface makes the  UECP advanced programming of the SmartGen Encoders quick and easy. Fully compatible with the latest UECP EBU SPB490 Version 7.05 and based on the latest RDS technology, the SmartGen 4.1 is designed for the 24/7/365 operation.

Warranty:  2 years parts and labours in our premises