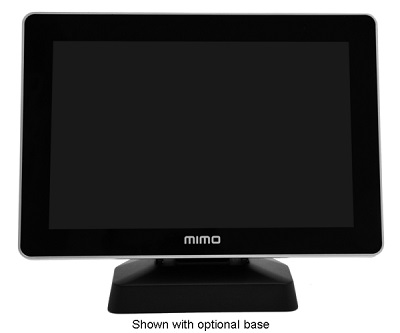 The Mimo Vue HD is the second generation of Mimo Monitors 10.1” monitor line. It features a modern zero bezel design, a nearly 180 degree viewing angle from its bright, high contrast, IPS screen, and an upgraded resolution of 1280x800. Available in both capacitive touch (UM-1080CH) and display only (UM-1080H), the Mimo Vue HD is a perfect solution for a wide variety of applications in healthcare, hospitality, retail, education, consumer, and many other industries.

Extremely sturdy build for commercial and corporate work. The optional base weighs 1.3 kg (almost 3 lbs) to ensure a stable touch screen on the table or desktop. For wall, pole, or other installations, the display has a VESA75 pattern on the back and is available for purchase without the base (UM-1080H-NB)

Now available with the ubiquitous HDMI input for video. Previously only available with the convenience of single cable USB video, Mimo Monitors now offers HDMI to supplement where USB video is not supported or inconvenient. The new Mimo Vue HD HDMI can be installed to almost any platform without drivers.

Datasheet can be found here: